Seiko 5 Sports, launched in 1968 and revived in 2019, has provided a wide range of durable and reliable mechanical watches for watch enthusiasts of all ages for more than half a century. Today, influenced by two leading Japanese animations, NARUTO and BORUTO, there are seven new Seiko 5 Sports creations. In 2002, NARUTO was first broadcasted in Japan and later launched internationally, and has fascinated audiences all over the world since then. BORUTO is the sequel to the series which focuses on Boruto Uzumaki, the son of Naruto, whose adventure continues today.

Each of the seven creations captures both animation's core characters: Naruto, Sasuke, Shikamaru, Lee, Gaara from NARUTO, and Boruto and Sarada from BORUTO. The series will be available worldwide as a limited edition of 6,500 each at Seiko Boutiques and selected distribution partners in December. 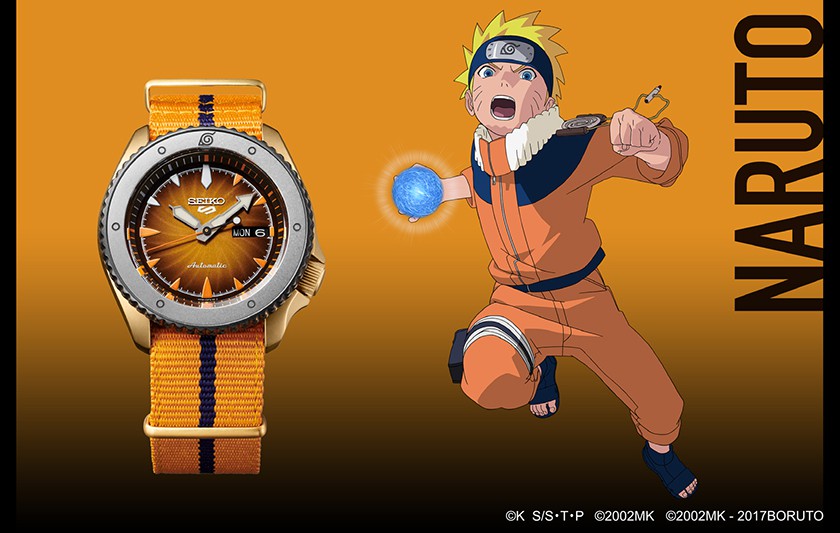 The style of this watch evokes the classic Ninja outfit of Naruto, and the worn-like bezel and case reflect the rigorous preparation needed to become a Hokage, a title bestowed on the leader of the Hidden Leaf Village where Naruto belongs. The bezel ring plate is designed after his forehead protector which is engraved with the symbol of his village.

The spiral pattern of the dial is inspired by his famous Jutsu (Ninja technique) " Rasengan". The nine orange indexes show the sealed Nine-Tails in itself, while the 12 o'clock position index reflects the pendant he inherited from Tsunade, his village's senior Hokage. 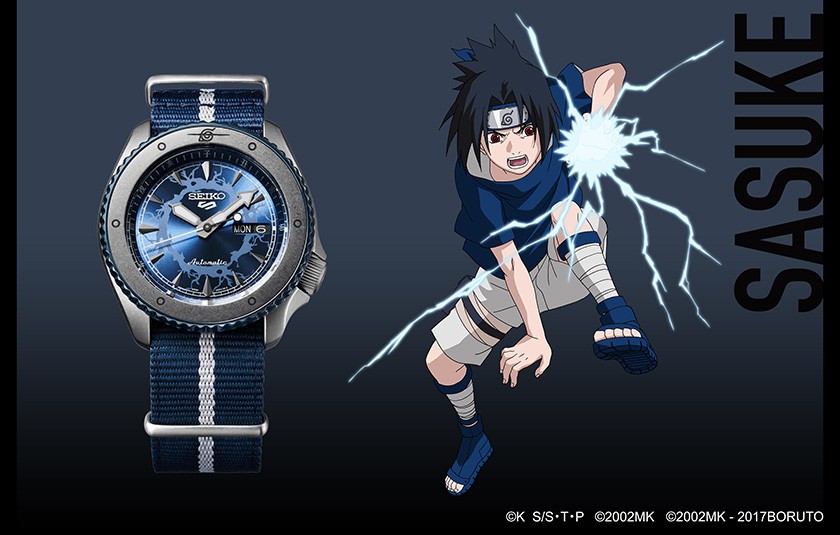 Sasuke, Naruto's friend and opponent, is captured in every detail by this watch with a blue dial. The dial design, in which the hand symbol of the Jutsu is discretely illuminated on the positions of one, three and eight o'clock, represents his trademark Jutsu "Chidori".

The horizontal line on the Hidden Leaf Village symbol on the bezel represents the scar marked by Naruto on its forehead protector, and the watch crown is engraved with the special " Sharingan" sign of the Clan. Kamon of the Uchiha Clan is printed on the case back. 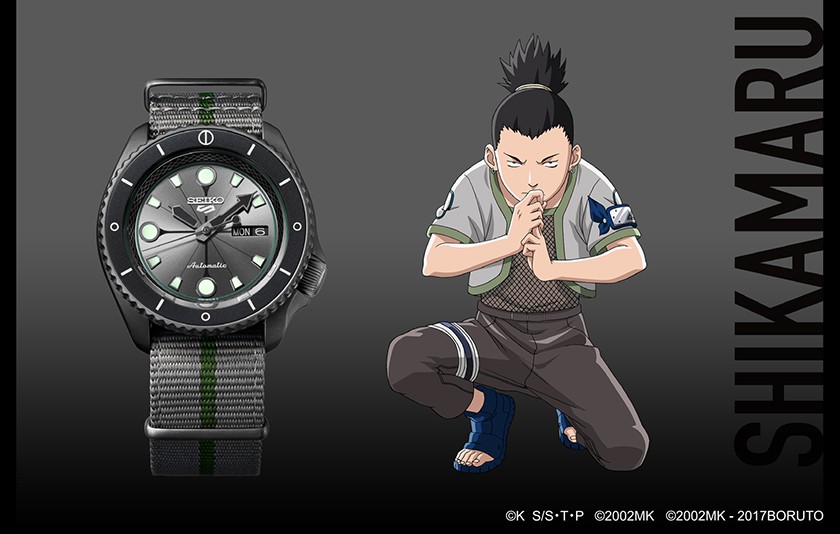 The "Shadow Possession Jutsu" of Shikamaru is perfectly mirrored in this watch's dial. The black colour scheme and the mesh-like dial ring with green accents are consistent with the wardrobe of the character.

The indexes are designed in the shape of his favourite Shogi game pieces, and the case back bears the Kamon of the Nara Clan. 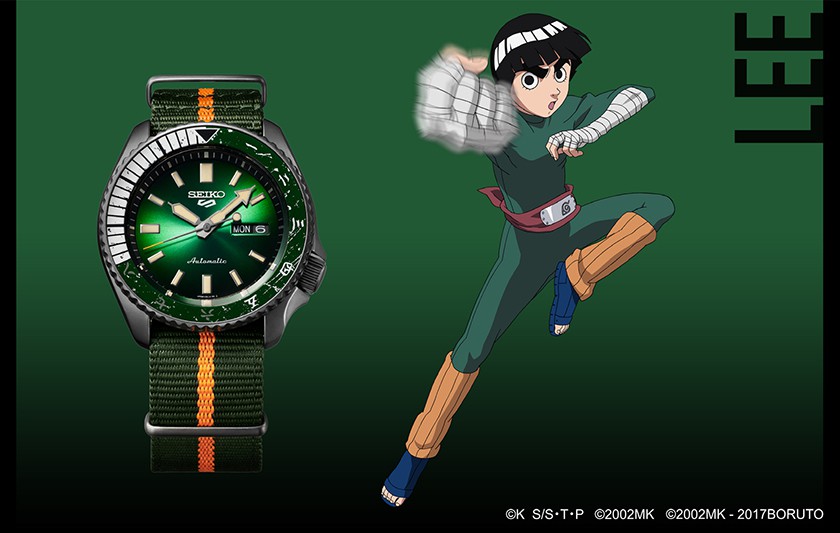 The colour combination is reminiscent of the signature jumpsuit and leg warmers of Lee. On one hand, the bezel represents the bandages of his arms and thigh, and on the other, the "The Eight Inner Gates," of which Lee had managed to open up to the fifth gate to obtain the extraordinary "Hidden Lotus". The kanji characters meaning "Guts" are on the back of the case as found on his heavy ankle weights. 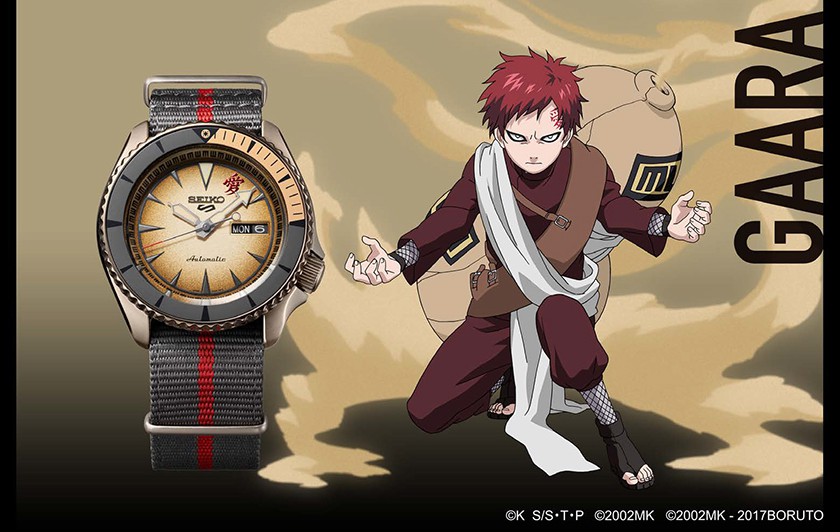 The brown case and the pressed dial design are inspired by sand, and Gaara and the One-Tailed sealed within him come to life with the kanji character for "love" at the one o'clock position. The pattern inspired by the mark on his gourd is seen on both the dial ring and case back. 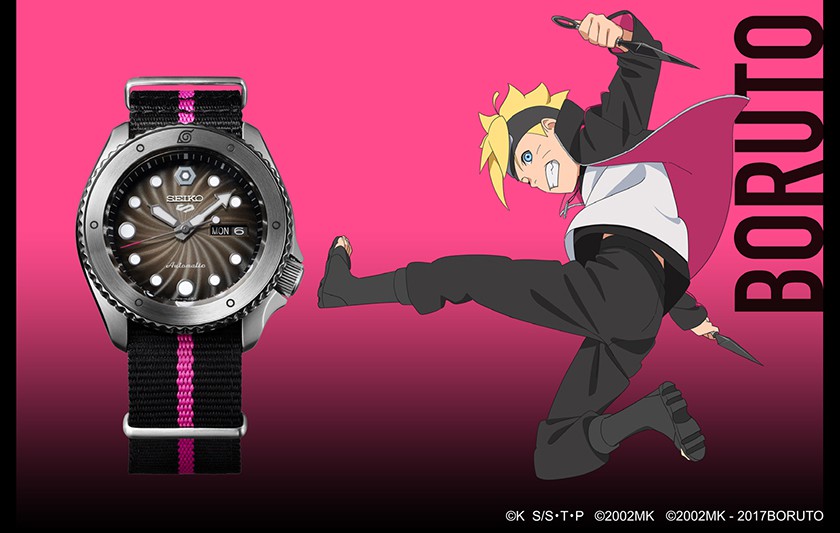 Inheriting the Jutsu 'Rasengan' of his father Naruto, the dial has the same spiral pattern in black. The colour of his costume is reflected in the vivid pink colour accents on the strap and seconds hand. As seen in the animation's logo, the 12 o'clock index is inspired by a bolt. Kamon of the Uzumaki Clan is printed on the case back. 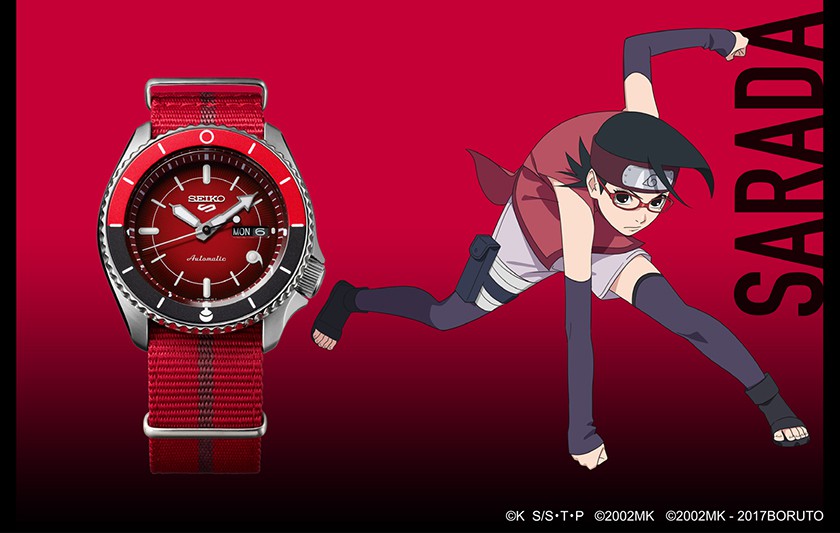 The "Fire Style: Fire Ball Jutsu" Sarada inherited from her father Sasuke, is expressed in the red gradation dial. The single mark of Tomoe on the 5 o'clock position shows that she is still a young Ninja in training to develop her "Sharingan." The two-toned bezel is indicative of how she inherited the traits of both her father Sasuke and her mother Sakura as a Ninja.

I'm a huge fan of this collaboration, as it reminds me of watching my favourite childhood cartoon series with my cousins.

The thing that amazes me is that Seiko's essence is not lacking in any of them, even though they are based on fictitious cartoon characters.